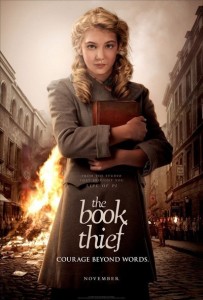 Let me preface this by saying that if you haven’t already dne so, you should definitely check out the book version of this. While I loved the film there is a lot missing from it and a lot to be gained from reading the book version that it’s based on.

Set in Nazi Germany this book tells the story of Liesl Meminger and the town of Molching. The film starts out in the same way the book does and for the most part does follow the plot as it appears in the book, albeit some of Liesl’s books have different titles and there is now a full dictionary in her basement rather than just parts of it.

There were only two changes in the movie that really bugged me though – rather than taking a little time to warm up to Max and become comfortable, she immediately gets along with him. And secondly, she doesn’t have the chance to feed bread to the walking Jews with Rudy. But as I said, it does stick to the story fairly well despite these and a few other omissions.

If you liked the book then I would definitely see the film version, the acting is good, the sets are good, it’s just a well made film. If you haven’t read the book, I would pick it up and give it a shot, it’s worth the extra effort for what it will add to your watching of this film. 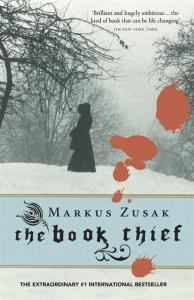 I’ll start with a little note today, there will be spoilers in this review. And a second note, I have not seen the movie The Book Thief so I am coming at this completely fresh knowing only that it was set during WWII.

Those two things said, this book has been sitting on my bookshelf mocking me since I was still in high school and found it in a second hand bookshop and brought it home. Every single time I’ve gone to my bookshelf looking for something to read it’s screamed at me ‘choose me, read me’ and every time I’ve ignored it, fearing that like many popular books with such heavy topics it would not be a book that would capture my attention. This year I decided it was time.